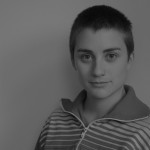 Janine Iten is a Swiss visual artist and performer who studied fine art in Hochschule der Künste Bern (CH). Between 2011 and 2013 she started to work with her own body as material and created several solo performances, shown in public spaces and at Festivals in Switzerland. 2013 Janine took place in the Dance Intensive program of Tanzfabrik Berlin, what from a collaborative process between six former peers resulted in a project named Collective matter shown in Zagreb and Berlin. Another collaborative project with Zihan Zhou (CN), Happiness, was shown at JuliDans festival in summer 2015. Currently Janine is studying Solo/Dance/Autorship at HZT.